Before and after: integral reform in Avinguda Vallcarca

Recently we gave concluded the integral reform that are taking place in a house located on Avinguda Vallcarca of Barcelona. So our interior department developed a 3D project execution our team work was commissioned to translate it into reality.

This new integral reform we carry out painting works, installation of pavement and other necessities because the rooms of the house lluïssin spacious and bright. In the following video you can see the work done by comparing the before and after.

The kitchen reform occupies a square surface in a stay independent, so we used a distribution U counter with three sections. On the right side settled the hob, the center is equipped with a sink if one section of the counter and the left side was allocated to support and work surface.

Moreover, this kitchen reform has several drawers and cabinets for storage in both the bottom and the top of the countertop. The bottom also took the opportunity to embed oven and washing machine, refrigerator while it stood at the end of the left. This will make it all the available space in a very organized.

The property has a bathroom that is equipped with all the essential health elements to provide the best performance. Thus, this reform has a large bathroom sink with drawers built, a toilet and a shower corner protected by sliding screens.

As for design, the walls of this bathroom reform was completely tiled with white tiles that were combined with the gray tone of the new pavement. This was achieved greater sense of breadth and depth in the room.

A Grupo Inventia find suitable professionals to perform your integral reform. In addition, we offer the possibility to request your budget without any commitment. 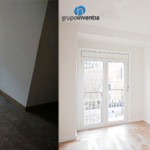 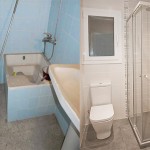 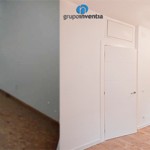 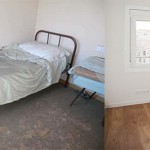 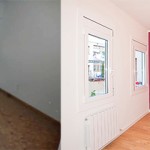