In Grupo Inventia we have completed for a new integral reform in Barcelona. On this occasion, the house, which was completely renovated, was the Sagrera street.

In general, they improve all the rooms and spaces of the house, from the bedroom to the kitchen, going to the bathroom. In addition to using neutral tones to enhance the brightness in public areas, settled a laminate of a very natural wood tone.

You can see all the improvements made in this integral reform in Barcelona share the video below.

To carry out this kitchen reform was a luxury, because it was a large space in which they could achieve a perfect layout for all elements. To this end, we chose a distribution in the form of L, in which the left leg shorter tour as a support surface and can also be used as a bar type kitchen.

In the end they had left a hole made for the refrigerator before giving way to the main section of the counter. On this, they installed two basic elements of the kitchen, hob and sink. Meanwhile, the oven is embedded in the cabinet below the counter and microwave on top.

Once rehabilitated, we can see that the bathroom has become a very functional and equipped with all the essential health items. Thus, this bathroom reform was equipped with a built-in sink with drawers, a toilet and a large shower protected by a sliding screen doors.

Thanks to the experience and professionalism of Grupo Inventia, get the desired results in your integral reform in Barcelona. Discover all our advantages and our economic prices contact us without obligation. 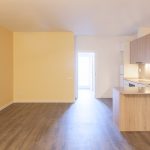 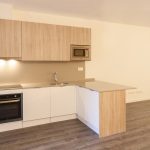 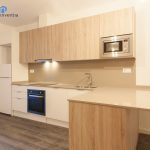 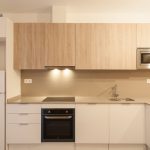 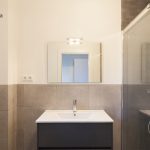 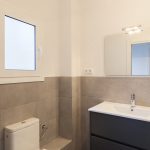 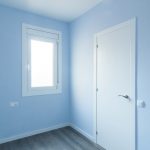 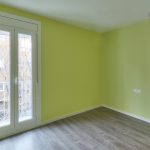