Today we completed a new integral reform in Barcelona. On this occasion the house, we have rehabilitated completely, was located in the Tragí Street, very close to the famous Via Laietana.

It was a loft property with bedrooms and bathrooms in separate rooms, but with the open kitchen. In this case, we wanted to give plenty of light to the house and we did paint the walls white and installing laminate flooring to a very soft wood.

In the following video you can see all the improvements made in this new integral reform of Grupo Inventia.

As mentioned, the kitchen reform is in the same space as the livingroom. For distribution we use an L-shaped desk.

At the end of the left side was placed a kitchen cabinet with holes tailored to embed all appliances. Then he placed the first section of the counter, very small, but suitable to place the sink. The tour turns right to give way to the second stage, more elongated. About this settled a hob.

This kitchen reform is white, thus generating the sought brightness. It also has several drawers and closets across the bottom of the countertop for storage.

The design used in the two bathrooms that are available this house is very similar. In both the main color is white, walls and sanitary ware and flooring combined with dark tone. Thanks to this brightness is higher.

As for sanitary ware, both have a complete team with a bathroom, a toilet and a shower. One thing to note is the door of a bathroom of these reforms, because it is opaque sliding. This got to take more space and slow down the natural light outside.

Grupo Inventia enjoy a professional and integral reform will have the best finishes. Contact us for further information without any obligation. 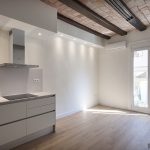 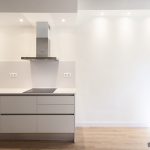 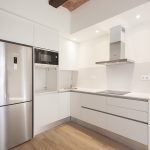 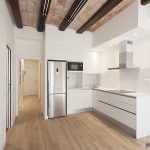 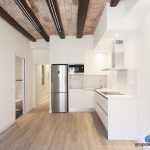 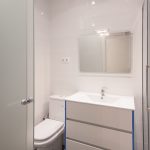 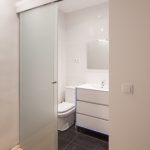 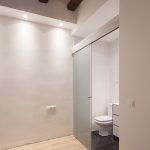 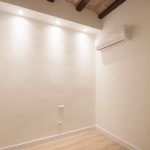 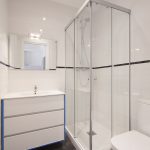