This week we completed a new kitchen reform in Barcelona. This time we ordered rehabilitate and fully equipped kitchen located on the Concepciín Arenal street of Barcelona.

In the next video you can see the finished obtained a stay now makes perfect, with enhanced picture and a kitchen equipment that offers the best performance.

This kitchen reform located in a separate room for the disposal of its elements was used as a distribution of L.

On the far right side of the fridge stood, with finishes of stainless steel. Then he put the main stretch of the tour, on which they settled a hob and a sink of one another. Under the first element is embedded oven.

The counter-clockwise twist and leads to a second section located at the bottom of the stay. This was used to support and expand the work surface.

The upper wall was tiled countertop tiles bevelled white and breaks were placed together, providing a very personal effect this kitchen reform. White color was also used in the kitchen cabinet, achieving generate greater feeling of space and light to the room. This is combined with darker shades such as finished wood countertop and new terracotta flooring installed.

In turn, they also expand the storage capacity of the kitchen, placing several cabinets and drawers in both the bottom and top of the countertop.

In Grupo Inventia we offer the best projects of kitchen reform. To get yours, so just contact us without obligation. 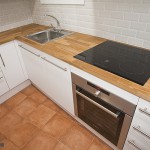 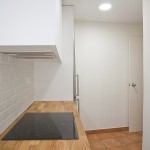 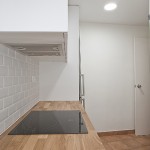 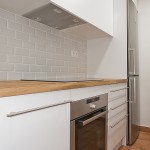 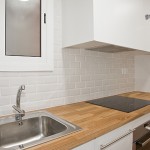 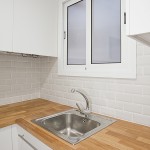 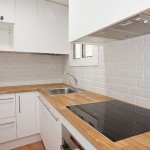 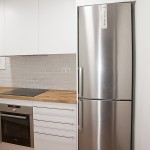 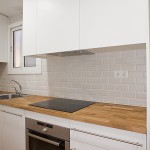 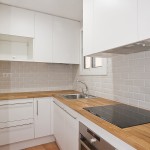 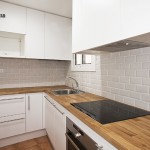