Recently in Grupo Inventia we completed a new kitchen reform in Barcelona. This time we went to the Sant Just Desvern town to renovate completely this room so important and daily use in any home.

Played to our advantage that the surface of the kitchen was full, so we could introduce improvements in the floor smoothly and the result was completely satisfying. The new image of the kitchen renovation can be seen in the next video.

The L distribution with island

The kitchen reform are located in a separate but stay open to living. In this case, as distinctive visual areas are placed a kitchen island that generates greater support surface and which used the bottom to increase storage capacity.

Regarding the provision of the kitchen reform was used as a distribution of L. At the right end of the central encastraron appliances, consisting of a refrigerator, a microwave and an oven. In addition they enable shelves where to place other small appliances like coffee maker and other kitchen utensils.

Then comes the section of elongated counter, which has a large bearing surface and on which it had a sink one another. Upon reaching the other end of the counter twist to the left and leads to a second section of the counter. This settled the hob.

In addition to the new facility this kitchen reform also served to expand the storage capacity. It took the entire bottom of countertops to put several drawers and cabinets, while the upper areas were also placed storage modules.

For the design of this kitchen our interior department opted for neutral tones and indirect light to generate more spacious feeling. Thus, for kitchen furniture was used for white and countertops and gray dashboard. This combination joins perfectly with other elements such as parquet flooring installed, creating a perfect image for the room.

A Grupo Inventia we have a team of experts that will make your kitchen reform meets your expectations. You can contact us and inform you without obligation. 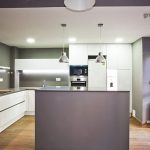 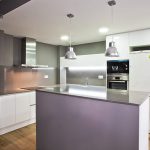 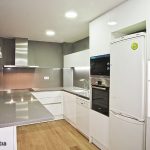 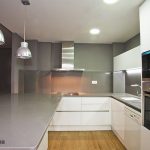 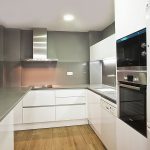 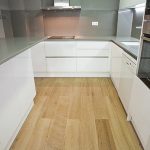 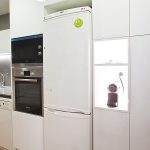 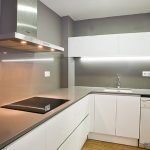 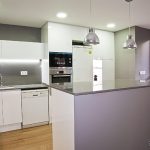 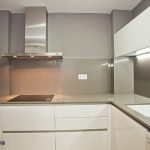 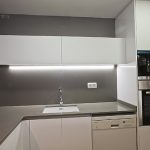 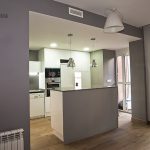