Grupo Inventia recently completed a new integral reform in Barcelona. This time, the project was carried out in a building located in one of the busiest areas of the Catalan capital, Avinguda Diagonal. It was a total refurbishment which attempted to provide housing nearly natural lighting. Thanks to the combination of colors and materials chosen, the owners enjoy the best design and the best equipment in your home.

The general lines of this integral reform in Barcelona framed under neutral tones. The beige and white are the protagonists in most rooms of the house. And thanks to the pavement installed a laminated parquet in natural wood tones, enhances the brightness and extent of the property.

Kitchen reform was distributed through an L-shaped counter where they were placed all the elements needed for proper use. First, prepared vacuum refrigerator because then born the aforementioned counter. After a first section usable as a work surface in the extended part of this tour was to install a hob and a sink individual. Using a classical arrangement, the oven will fit in the bottom of the hob.

Besides equipping completely kitchen reform with a large storage capacity, as it has several cabinets and drawers in both the bottom and the top of the countertop.

The bathroom which also has this house was rehabilitated in this integral reform in Barcelona. Decorating and equipping to complete this reform bathroom looked comfortable and functional space. A large sink, a toilet and a shower were the elements chosen by the owners for this bathroom reform.

In it, the neutral tones are also protagonists. With a partial tiles beige tiled and the rest of the wall painted white, the feeling of breadth and depth in this patent bathroom reform in Barcelona.

A Grupo Inventia we know our potential, therefore no spare time to provide the best service to all interested in doing a integral reform in Barcelona or surroundings. To request further information, please contact us. 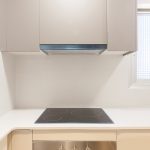 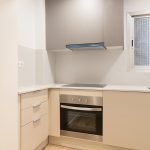