A few days ago than in Grupo Inventia we completed a new integral reform, specifically in a house located in Bretón de los Herreros de Barcelona.

The house enjoys amplitude has been enhanced and the brightness outside. To accomplish this, they use neutral tones on the walls that were combined with the finishing wood doors and windows. This provides an aspect between rustic and modern property.

To further appreciate the improvements made in this integral reform, we share the next video.

To kitchen reform, which is open to the dining room, we chose a U-shaped distribution, since it was the willingness with which achieved the best organization for items from the kitchen.

On the right side was placed the refrigerator, camouflaged by cabinet doors, and then was placed first section of stove, on which was installed a sink if one and top, kitchen cabinet wardrobe in the oven. The tour, which continues in the background, went to work and support surface. Now on the left was placed third section of the counter. In this, he installed a ceramic hob.

In this case, the stay was given a lot of functionality, in addition to applying a very personal and health facilities completely.

The bathroom reform was completed with a shower built furniture, a toilet and a shower. As for design, the walls were tiled to half height with white bevelled tiles and painted the same color the rest of the wall. Among the highlights finished hydraulic pavement was installed.

The best services for your integral reform you’ll find in Grupo Inventia. To expedite the process, please contact us without obligation. 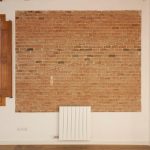 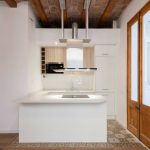 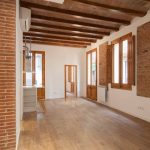 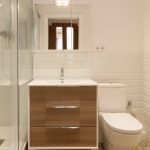 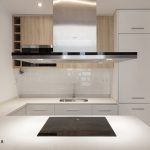 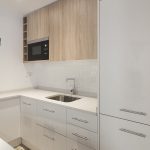 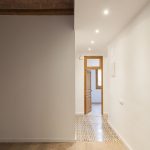