Grupo Inventia recently gave concluded that integral reform were carried out in a house located in Enamorats street of Barcelona.

In general, we managed to improve both image and equipping all the rooms of the building. Under modern design also incorporate finishes that stand out with its own light. For example, we installed both hydraulic flooring in the kitchen and bathroom. In the kitchen reform this floor serves as a visual divider between the same kitchen and livingroom. The bathroom reform, hydraulic pavement, combined with neutral colors that were used, contributes to a greater sense of spaciousness

All improvements made in the integral reform can be seen in more detail in the next video.

The kitchen reform was distributed in the form of U. On the right side was placed the first section of the counter and he installed the sink. The area of the bottom out extra space and support work, while the left side was placed three kitchen countertop. The latter front plate kitchen is open to the living room, which also takes the function bar.

In turn, this kitchen reform is also equipped with all necessary appliances. A refrigerator, oven and microwave, all embedded, make up the new equipment.

To reform bathing thought a spacious and fully functional. Thus, settled a toilet and a bathtub.

Regarding design, this bathroom reform the walls were tiled to half height with white bevelled tiles and painted the rest of beige. The choice of colors is very accomplished since her get a sense of spaciousness and comfort.

The integral reform of your house will be in good hands with Grupo Inventia. Contact us with no obligation and find all the services we offer. 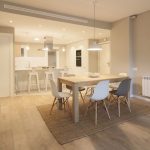 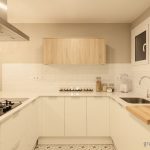 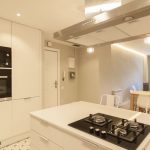 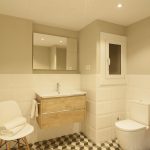 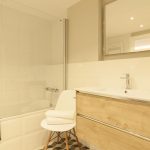 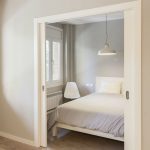