Recently we completed a new integral reform in the city of Barcelona. Specifically, we fully rehabilitated housing located in the town of Sant Joan Despí. In it, in addition to finishes speaking, we have improved the design and equipping each of their stays. Lounge, kitchen, bathrooms … all the spaces have become the hallmark of the Grupo Inventia.

In general, this integral reform we wanted to enhance the feeling of spaciousness, to make more pleasant and comfortable everyday owners. One of the requirements to achieve this has been to enhance the natural light throughout the house.

So you can see all the details of this new integral reform share the following video.

The kitchen reform was distributed in the form of U, the remaining elements of the kitchen organized as follows. In the first section of the counter on the right side stood a sink if a single in the second, deep, settled a hob, while the third is located in the left, is a destination bar as support surface, since it is open to the living room.

Meanwhile, household appliances were placed right in front of the entrance to the kitchen, wardrobes and all of them composed a fridge, oven and microwave. Regarding design, this reform highlights the white kitchen, all furniture, and tiles on the wall of the hydraulic area of the sink.

This house had two bathrooms and both were completely rehabilitated, achieving very functional spaces. Both bathrooms reform toilet was installed with built-in drawer, a toilet and a shower.

They design highlights the strength of neutral tones, which are comfortable and got a greater feeling of spaciousness.

With Grupo Inventia your integral reform will achieve optimal results and desired. Contact us without compromise and find all the services we offer. 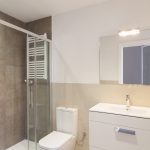 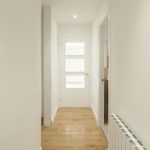 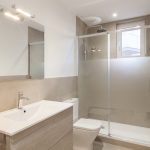 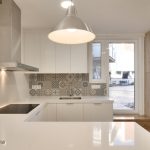 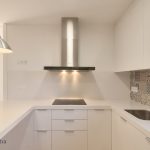 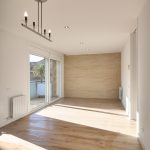