Among the recently completed integral reforms in Barcelona framed realized in Gran de Gràcia street. It was a total renovation of the building that had a kitchen open to the livingroom and a bathroom suite among the highlights. In that hall, carried out the installation of brick wall and ceiling, thus maintaining the essence of yesteryear that characterized the houses located in this area of Barcelona.

In the next video you can see the final results of the work done by the company’s integral reforms in Barcelona, Grupo Inventia in all rooms which had the apartment.

In specific areas, mention must kitchen reform. As noted, the kitchen was open the livingroom, but it was good to differentiate their place in maintaining respect for the original hydraulic flooring and the laminate flooring was installed in the majority of the property. In this case, we performed a work of restoration.

This kitchen reform was distributed through an L-shaped counter in one of its parts, was placed a kitchen cabinet in which were embedded appliances. As detailed, the fridge is camouflaged by the gates of this furniture. Then the stove began his journey, settling in this first section a single sink. Twisting to the right, the road continues this broad counter. It was this part where he installed a ceramic plate with a removable hood. As for storage capacity, kitchen reform has several compartments in both the bottom and the top of the countertop.

We have also mentioned bathrooms reform, in this case the courtesy and the suite. The toilet reform was completely finished equipping stay. A sink, a toilet and a comfortable bath items were chosen to rehabilitate this stay. Regarding the reform of the bathroom suite, this was equipped with a large double sink, a toilet and a shower functional, ideal for day to day. Highlights this stay its large window that illuminates both the bathroom and the room adjoining it. How to bear in mind both reforms bathroom remained hydraulic pavement.

With such excellent results, of the owners was very noticeable. Specializing in integral reforms in Barcelona and surroundings, you can request the services of Grupo Inventia making contact with them. 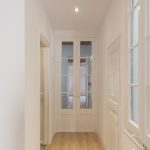 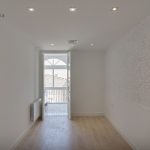 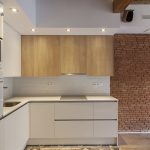 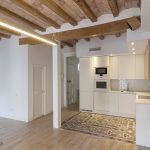 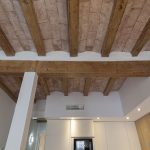