We recently completed a new rehabilitation project in the city of Barcelona. This time we entrusted to carry out the kitchen reform of a house located on the Bac de Roda street. It was a total refurbishment which improved both the design and the equipment of the room.

In the next video you can see all the details of this new labor carried out by the kitchen reform team at Grupo Inventia in Barcelona.

The kitchen is very near the entrance of the house, so we chose a two fronts distribution creating a corridor in which the owners have everything at your fingertips and very functional.

At the end of the left side are placed a kitchen cabinet, significantly increasing the storage capacity of the room, and then the refrigerator. Then comes the first part of the tour, on which they had a double sink.

At the beginning of the right side were recessed oven and microwave, arranged vertically and then a new section of the counter. This, in addition to supporting surface, settled a ceramic plate accompanied by a hood will prevent concentration of smoke and odors when cooking.

As mentioned, this kitchen reform expands the storage capacity with several drawers and cabinets in both ends of the stay at the bottom of the countertop. To use this furniture was white and was combined with beige countertops.

Another characteristic of this kitchen reform is the floor. For it used a hydraulic pavement that gives color and personality to a room in which neutral shades. Another detail of this new work is at the bottom of the kitchen stood a bar, with stools enabled, creates the perfect space to perform daily intakes.

The experience accumulated during all those years ago Grupo Inventia a reliable and professional option for your kitchen reform. We deliver your project and quote for free and without obligation. 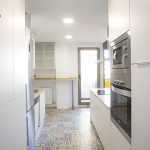 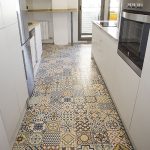 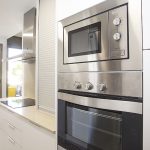 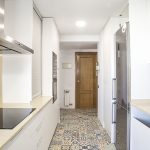 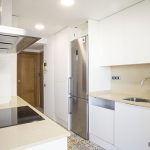 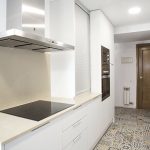 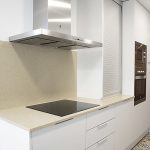 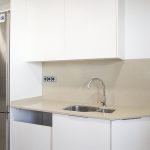 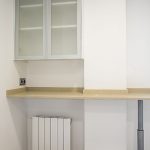