Barely a few days ago in Grupo Inventia put an end to the kitchen reform we were performing in Múrcia street in Barcelona. It was partially reconstructed in which we can improve both the design and equipment of the entire stay.

Broadly speaking, we use neutral colors for all the elements of this kitchen reform as well get generate greater feeling of spaciousness. Before going into details, you can see the improvements in the video below.

Distribution of kitchen in L

Being a large room, we decided that a distribution in L was the most suitable both to take advantage as much space as possible for the organization of all elements.

At the end of the right we place all appliances, embedded in the kitchen cabinet that we arranged. This new facility consists of a fridge, oven and microwave. After that, comes the counter, which was devoted to surface.

The hob turns left, leading to a much more elongated second tranche. About this installed a sink one breast and hob.

Kitchen reform implies greater storage capacity, because it has several drawers and cabinets along the entire bottom edge of the worktop and the upper part. With this, the owners have spaces in which to store food, utensils and other kitchen items.

For design, we opted for a kitchen cabinet wood tone, a very soft color but combined perfectly white walls and countertop and gray pavement. This generated a greater feeling of spaciousness and a very fresh and spacious feel.

In Inventia Group we have a specialist for your kitchen reform will advise you when choosing both the distribution and the design of your new kitchen department. You can contact with us without any compromise. 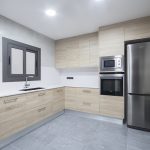 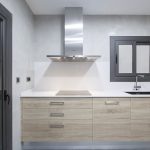 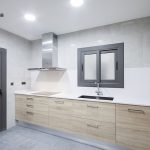 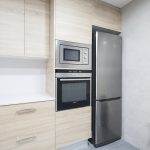 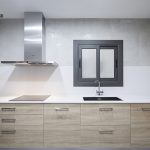 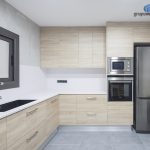 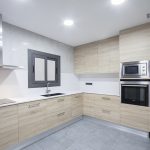 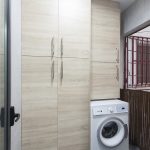